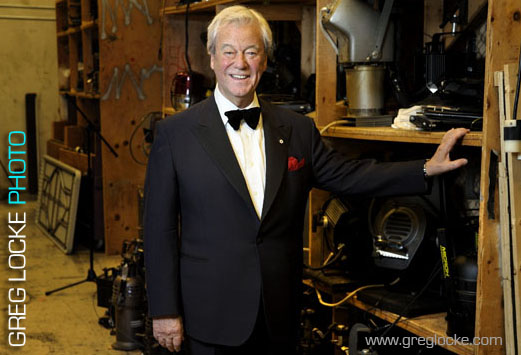 The Newfoundland born Pinsent may be the most successful performing artist to come out of the province and has had an amazing run. If you are old enough you will remember him as Sergeant Scott in a black and white Canadian TV series The Forest Rangers. For Newfoundlanders he will always be Will,  The Rowdyman, a 1972 film that has become a classic and called “one of the best films made about life in Newfoundland” in a Wikipedia entry.

Personally, unlike many of my fellow Newfoundlanders, I preferred the 2001 film, The Shipping News from the Pulitzer prize winning novel by E. Annie Proulx. Pinsent was in that also.

Some of Pinsent’s other credits include Due South, Law and Order, John and The Missus, numerous roles at Stratford and even the voice of The King in the animated children’s series and feature movie Babar.

The 2006 film Away From Her, written and directed by Sarah Polley and starring Pinsent alongside Julie Christie earned critical acclaim nominations at the Oscars and BAFTA awards and wins at the Genies, Directors Guild of Canada and Golden Globe. Pinsent won the genie for Best Performance by an Actor in a Leading Role.
(see the trailer)

These days you can catch him in guest spots as the rum runner, Maurice Becker, on the CBC TV series, Republic of Doyle.

If acting and performing wasn’t enough Pinsent’s latest project involves Canadian music legends Greg Keelor (Blue Rodeo) and Travis Good(The Sadies). The musician took his poems and prose and collaborated on a new album Down and Out in Upalong.

The project came together when filmmaker Mike Bolland, who shot the Pinsent biopic Still Rowdy After All These Years, took Pinsent’s writing to his friend, Travis Good …who took it to Greg Keelor.

Forty years later, The Rowdyman, is back on the road. This time in a band.