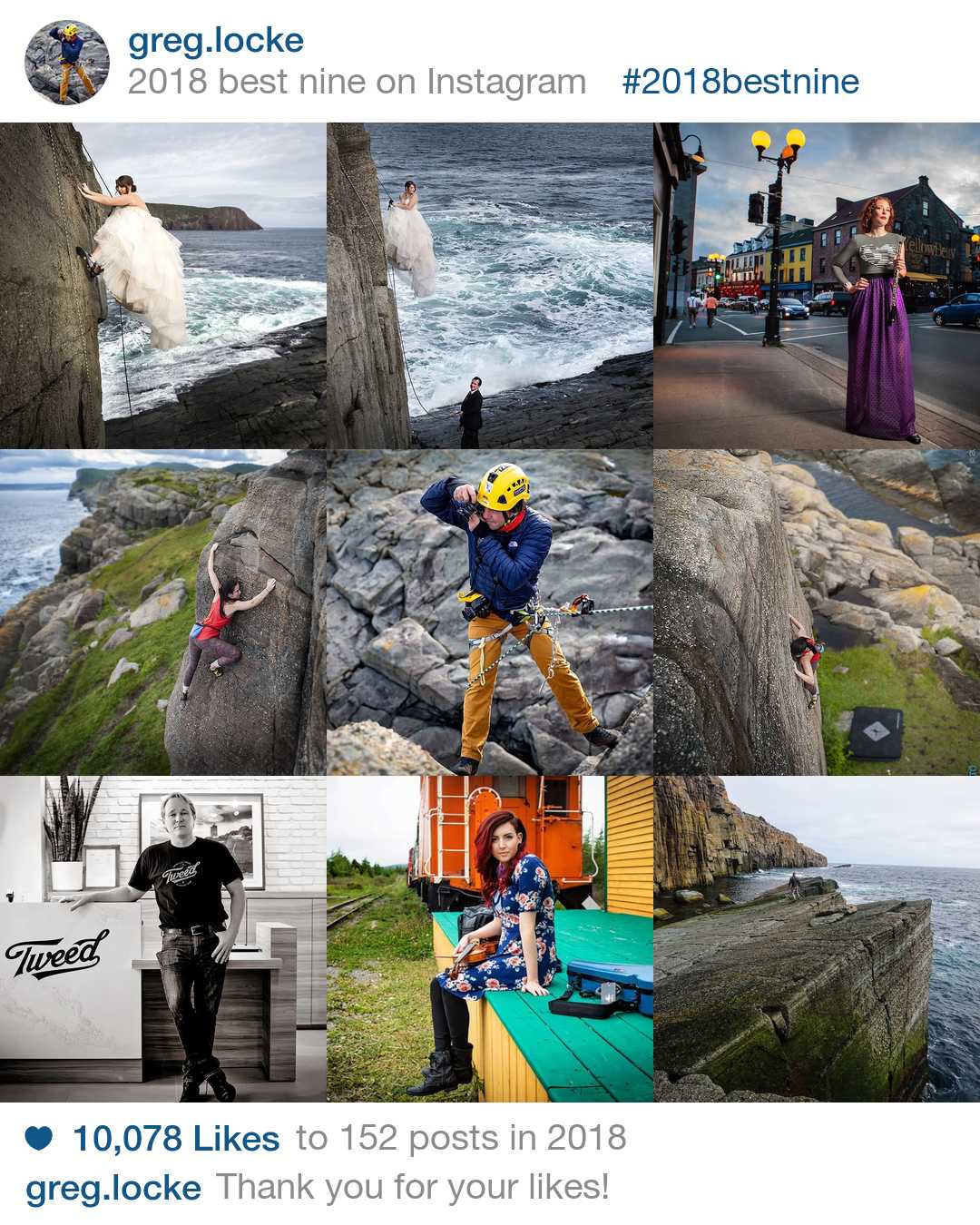 Well, there goes 2018. Hope it was good to you. Here are my top 9 photos of the year according to Instagram.  Although the one of me was taken by Terry Day! Nice to look back and curious because what your favourite photos, or what you might consider the “best” …. are seldom what other think. The thing I like about these are they are a product of great subjects and great adventures. Here is to 2019 so get out there and make great photos!  #2018bestnine.

An Audience of Chairs – Movie poster 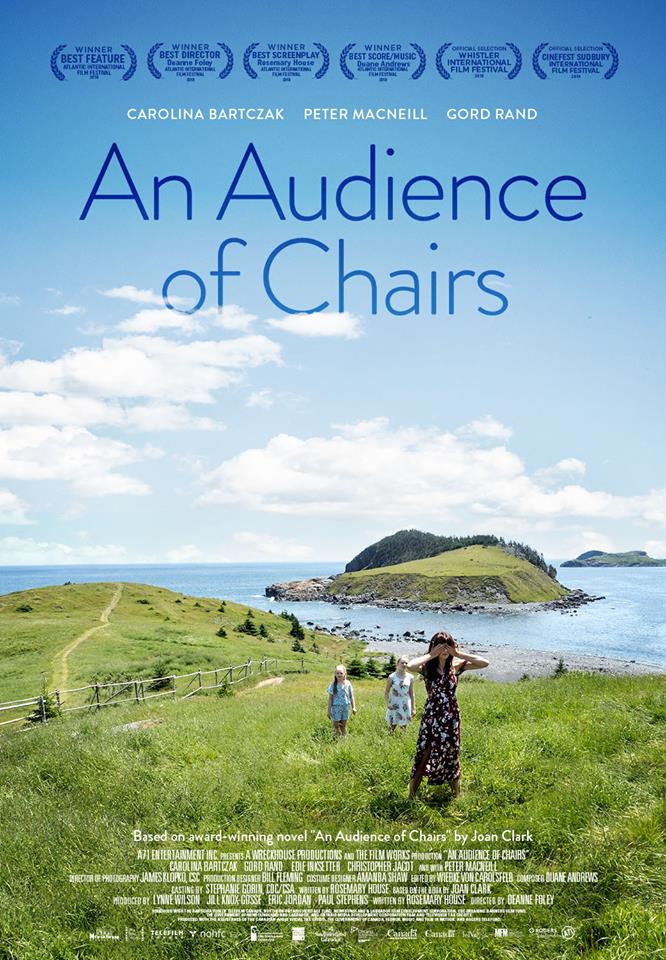 The movie poster for An Audience of Chairs. Shot in Tor’s Cove, Newfoundland in the summer of 2017 and still one of my favourite images. This film is not making the film festival circuit so treat yourself and go check it out. FaceBook page for news!

Bride on the rocks 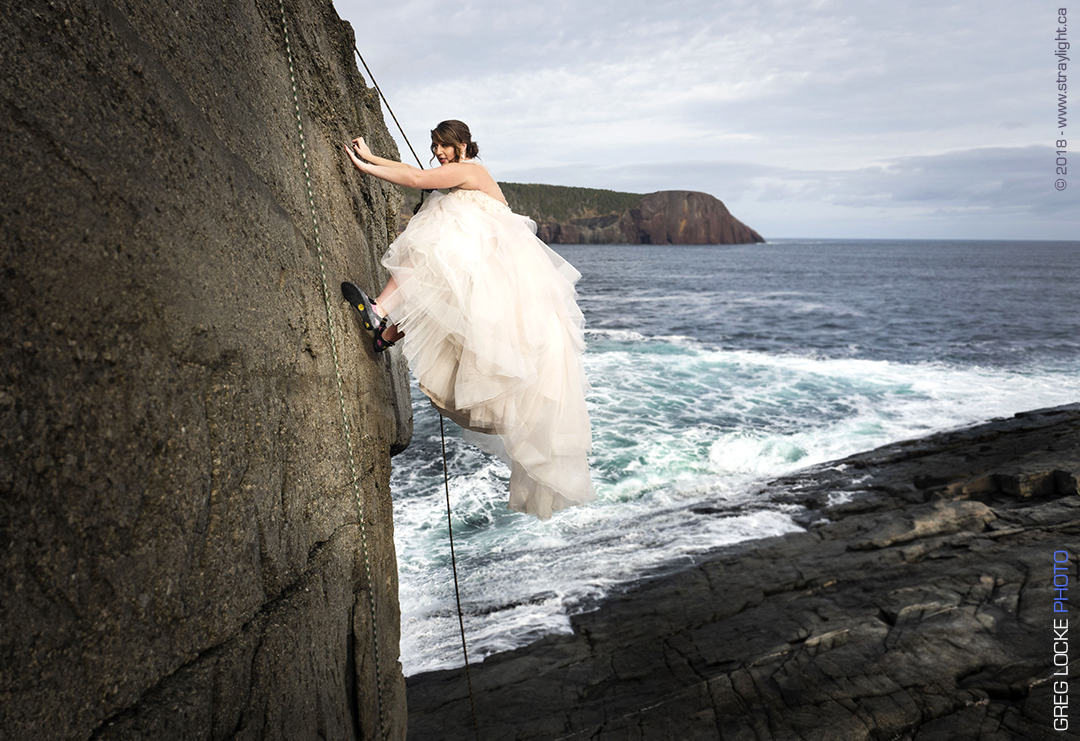 Mandy and Steve got married!!  …but being avid rock climbers they wanted some photos that reflected their love of the sport. This is not the realm of regular wedding photographers so they turned to their local climbing community.  So on a beautiful fall morning our small crew headed out to make this happen for them. Along with Mandy and Steve there was, rope access specialist and photographer Terry Day, experienced climber Thom Smith, all ’round adventurer and drone pilot Brandon Whelan and myself. We had a location in mind at a regular climbing crag in Flatrock, north of St John’s that had the right combination of dramatic and being fairly “wedding dress accessible” …despite being called “BloodBath”. The plan was reviewed, ropes were rigged, the drone was launched and everyone took their places. I’m hoping this was a first for Newfoundland. Thanks everyone for an epic shoot and a big congratulations to Mandy and Steve!

Something in the Atmosphere 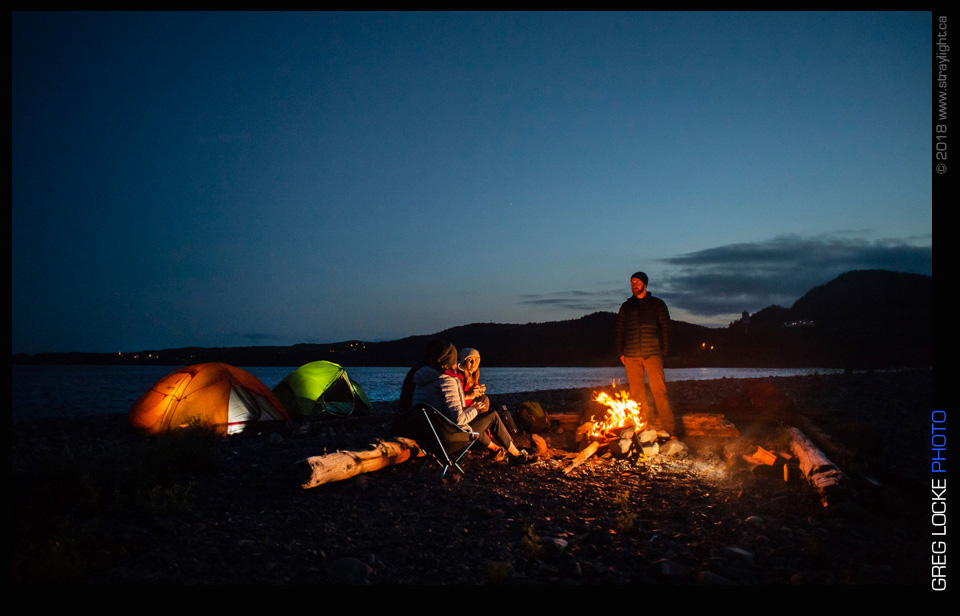 Back in August outdoor retailer, Atmosphere, came out to Newfoundland to shoot their fall ad campaign on the iconic East Coast Trail  …and it was a blast! Our crew of eight hiked, scouted explored and shot in locations from Flatrock to LaManche over 5 days. Even Cape Spear  …as far east as you can go in North America! For a photography and ad people its very rewarding to be doing full on advertising production on location in beautiful place.

The photos are making their way through their social media feeds and their retail website. Here is a small cut of my favourites. 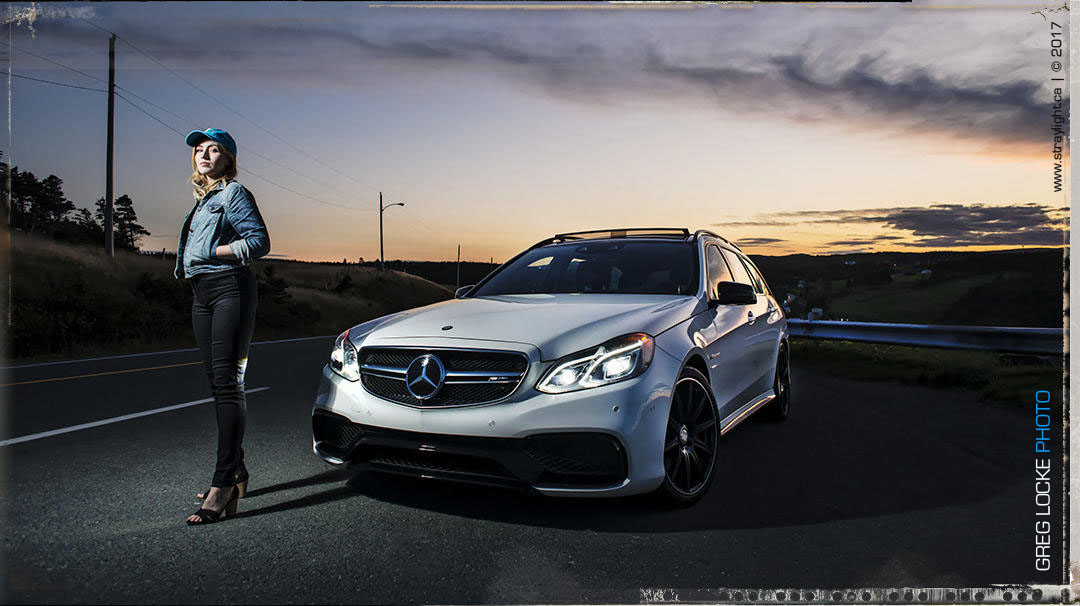 My new ad in Newfoundland Quarterly. 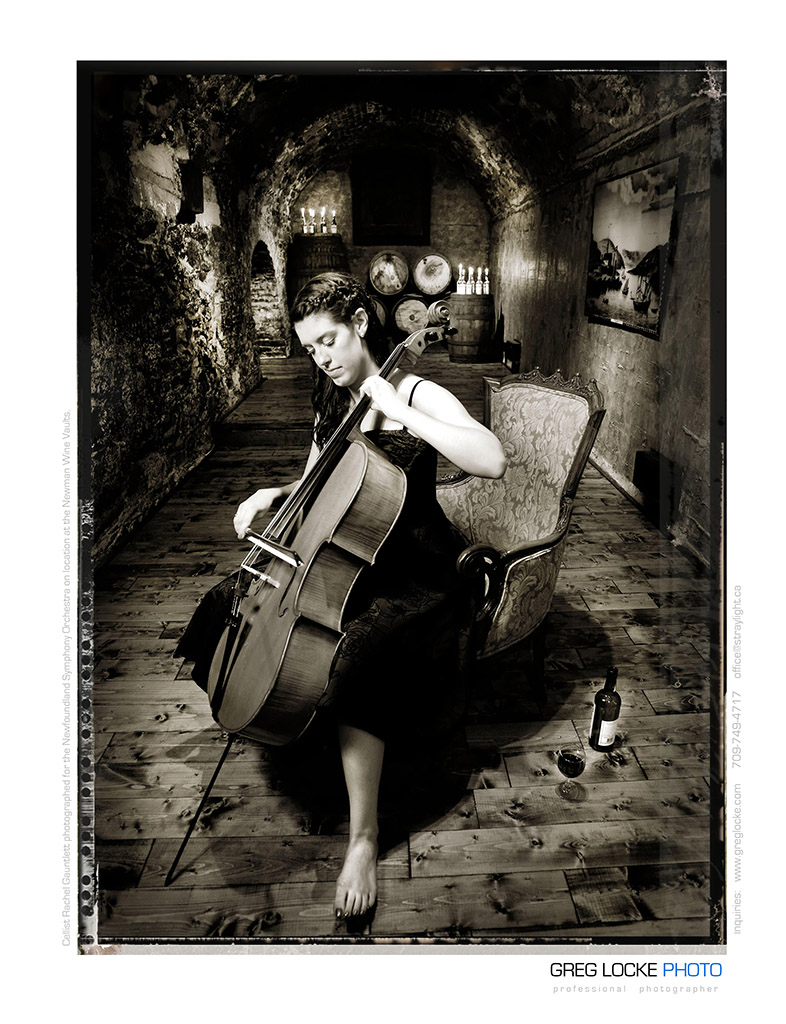 Newfoundland Quarterly is Newfoundland and Labrador’s premier arts and cultural magazine. It’s reproduction quality, design and quality makes it a perfect place for me to place my ads. If you love magazines, do check them out 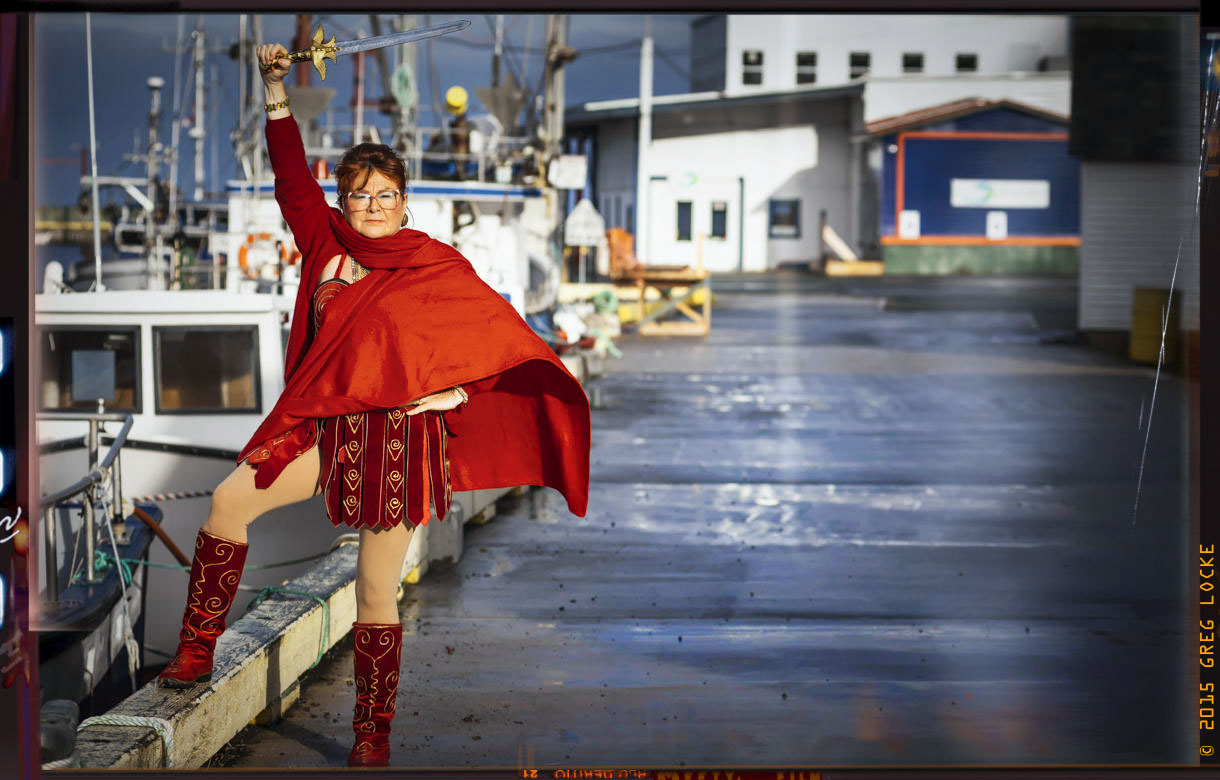 Such a great pleasure with work with Mary Walsh and her small guerrilla team on the Marg Brings Change campaign during the 2015 election. You can check out all the videos, memes and posters at margbringschange.ca. …and MARG!, Princess Warrior, didn’t have to smite anyone. Although the Canadian voter certainly smited Stephen Harper and the Conservative party. Canada now returns to regular programming.

Every two years since 1983 Sound Symposium has been happening in Newfoundland, Canada at the edge of the North Atlantic. Founded by classical musician and percussionist, Don Wherry, the event grew from a bunch of avant garde musician friends to a ten day international festival of new music, performing and sound art with everything from classical and jazz musicians experimenting with new sound, dance and theatre to audio engineers and sculptures creating audio art installations in the wild coastal environment. The soundscapes created have become the hallmark of Sound Symposium which happens once again in July of 2014.

We shot this video at a 2012 Sound Symposium event organized by Gayle Young, a sound artist and founder of Music Works magazine. She led a group of musicians to remote  Doctor’s Cove, Newfoundland, 100km south of St. John’s to find resonant rocks and build lithophones.

The Newfoundland Historic Trust is announcing its call for nomination for the 2013 Southcott Awards.

The Southcott Awards were established in 1984 by The Trust to recognize those who have demonstrated excellence in building design, preservation and restoration of the architectural heritage of Newfoundland and Labrador.

The quality of our architectural heritage has come to be one of the defining aspects of Newfoundland and Labrador. The Historic Trust has been instrumental in establishing that definition, but our award winners over the past twenty-nine year have made that definition a reality.

Nominations are now being accepted for the 2013 Southcott Awards in following categories:

Building Restoration / Preservation – Nominations are considered for finished architectural restoration projects. The committee considers architectural design, quality of conservation work, preservation of original features, use of traditional materials, and the integrity of the structure and its surrounding site.

New Building Design -Contemporary, high quality building design has the power to encourage economic development and improve the quality of life for residents in an area. Such design may address issues of sustainability and encourage community renewal. This nomination is for individuals or organizations that have completed an architectural design project sensitive to the heritage character of the surrounding environment.

Heritage Craftsperson/ Tradesperson – This award will recognize the skill and contribution of an individual in the craft or trade professions in heritage conservation. The individual must work using specialist and traditional methods and exhibit a high standard of craftsmanship. Individual tradespersons, architects, or other heritage professionals having completed exemplary work relating to the conservation, preservation or restoration of a heritage structure are eligible for nomination.

Further information and to download nomination forms please visit the Southcott Awards section of our site or click below to access the various nomination forms. You can also contact our office via e-mail, coordinator@historictrust.ca or call 709.739.7870. All completed applications submitted by May 3, 2013

The Selection Committee reserves the right to not give an award in a category.

The Southcott Awards are named for one of the most important nineteenth century Newfoundland building firms: J. and J.T. Southcott. We know them today principally for the Second Empire designs of J.T.’s architect son, John. The characteristics of this style are concave, curved mansard roofs with hooded dormers in the mansard. While the style started with the development of the Southcott properties at Park Place on Rennie’s Mill Road in St. John’s, they spread throughout the whole colony. Many examples of this style remain intact today. However, the Southcott Awards recognize and celebrate numerous architectural styles visible throughout the province.

….we have been proud supporters of the Newfoundland Historic Trust and the Southcott Awards since 1990! You should support this organization and its work in the preservation, education and advocacy for Newfoundland and Labrador’s architectural history and culture. BECOME A MEMBER!