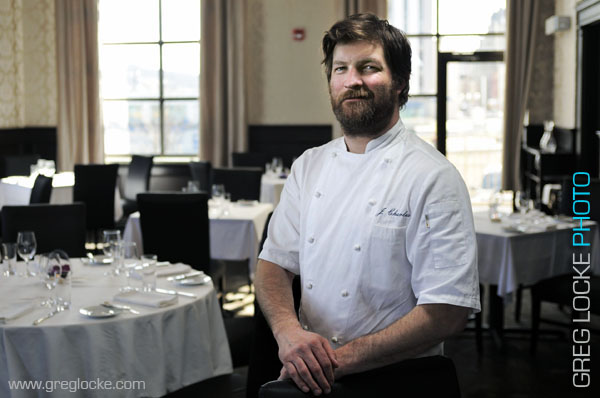 Chef Jeremy Charles of Raymond’s has been named the Best Chef in St. John’s by The Scope newspaper in its annual Best of Food and Drink. In fact, Raymond’s picked up 9 Best of … categories this year.

The Scope, the only newspaper that matters if your life, art, culture, work or pleasures revolve around downtown St. John’s, says its all about elevating the dining experience and there is an emerging food and wine culture in St. John’s. One of the other categories it won was, Best Place You’ve Yet to Try.

Since Raymond’s has opened it has received a lot of local and national attention.  Enroute magazine named it the Best New Restaurant in 2011. “Charles’ food is fresh, bright and ultimately thoughtful.”

Here is what they had to say;

“How to impress your clients: Housed in a beautifully restored former bank, the dining room at Raymond’s, with its sparkling chandeliers, is every bit as impressive as the food. Start with East Coast oysters, as fresh and briny as they come. Move on to the local lamb. It’s raised on an island, and its diet of salty grass and seaweed imbues the meat with a profound savouriness. Impress clients by ordering the seven-course tasting menu, and let sommelier Jeremy Bonita match each course with wine. ”

The thing that captures my imagination is how they source food locally. They make the effort to get the freshest of Newfoundland fish, meat and vegetables which, literally, adds the local flavour.

…and the dining room makes a friggin ‘awesome studio!!